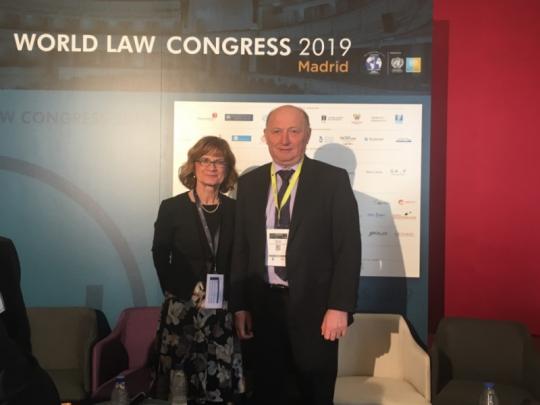 22 February 2019 - Invited by Professor Rainer Arnold, University of Regensburg, President Dr Miroslav Šeparović and Deputy President Dr Snježana Bagić participated in XXIst International Congress of European and Comparative Constitutional Law, held from 18 to 20 February in Madrid, Spain. This Congress, with a long-standing tradition, had been held in Regensburg for eighteen years, in Kishinev together with the Constitutional Court of Moldova in 2017. Its twentieth anniversary was celebrated at the University of Gdansk, and this year it was held in cooperation with the World Jurist Association within their Biennial Congress in Madrid.

At this XXI Congress, the participants, presidents and judges of constitutional courts and internationally renowned academics from many countries, discussed about modern concept of the Rule of Law and its development by constitutional justice. Within the second day, Deputy President Bagić delivered a speech on the role of the Croatian Constitutional Court in creating constitutional justice, emphasising the Court's active approach in determining and formulating constitutional principles by using all the available methods (grammatical, systemic, historical, teleological and comparative), as well as techniques of interpretation. During the solemn session of the Congress, the Spanish King Felipe VI was presented the World Peace and Liberty Award, and the monarch closed the event with the firm conviction that "the law is the best way for achieving and maintaining the peace."