Working meeting at the EU Court of Justice 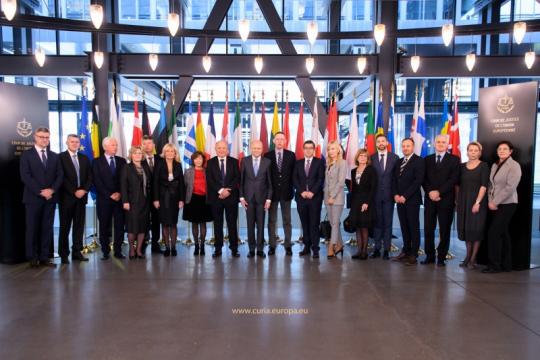 13 November 2018 - upon the invitation of Mr Koen Lenaerts, President of the Court of Justice of the European Union, a seven-member delegation of the Croatian Constitutional Court headed by President Dr Miroslav Šeparović, paid an official visit to the Luxembourg Court on 12 and 13 November 2018. The delegation took part in working sessions with President Lenaerts, Judges Ilešić and Rodin, First Advocate General Mr Szpunar, and several other members of the CJEU. The discussions focused on the following topics: Dialog between the Courts, European arrest warrant and extradition to third countries, unfair contract terms and provisions, asylum and immigration.

The CJEU is responsible for ensuring that the EU treaties are interpreted and applied according to law. It deals with various types of actions and, at the request of national courts, interprets EU legislation to ensure uniform application of EU law in the Member States.