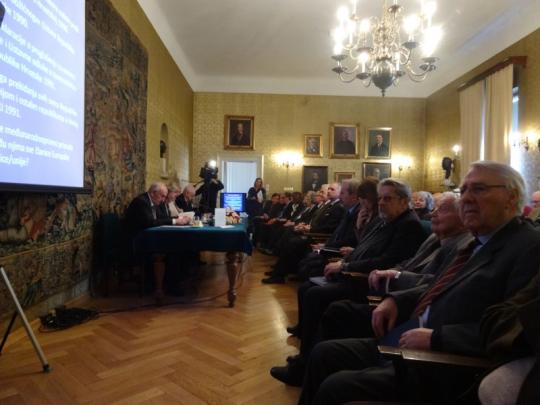 20 February 2015 - Professor Jasna Omejec, President of the Croatian Constitutional Court, held a speech today at the scientific gathering held in the Croatian Academy of Sciences and Arts on still disputable topic related to the date when Croatia gained sovereignty and independence in 1991. In her lecture entitled "Croatian Independence Day in legislative, criminal and constitutional jurisprudence", President Omejec spoke about the foundings of the Constitutional Court related to the date when Croatia acquired qualities of a sovereign state within the meaning of international law. She recalled that the Constitutional Decision on Croatia's sovereignty and independence of 25 July 1991 had never officially entered into force, but it started to produce legal effects on 8 October, when the Croatian Parliament passed the Enactment on Succession. Thus, 8 October 1991 is a relevant date for choosing the relevant international law to be applied in criminal proceedings of war crimes. On that date Croatia acquired qualities of the sovereign state within the meaning of international law, which fact was also confirmed by the Badinter's Commission. She also emphasised that this internationally accepted and confirmed fact has to be respected in the jurisprudence and applied by the national courts in their interpretation of the Constitution, laws and other sources of law in the specific judicial proceedings.

President of the Croatian Academy of Sciences and Arts Zvonko Kusić opened this scientific gathering, and Mr. Andro Krstulović Opara greeted the participants on behalf of the President of the Republic, Ms Kolinda Grabar-Kitarović. The participants were also addressed by Dr Davorin Rudolf, F.C.A. and Vladmir Šeks, MP.