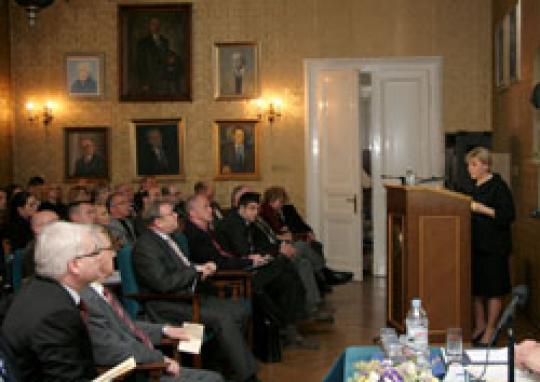 18 December 2010 - in the Croatian Academy of Sciences and Arts a round table was held marking the twentieth anniversary of the implementation of the basic legal act of our State, where the prominent experts, state officials and academicians scientifically debated on its role, on the role of fundamental constitutional principles and their application. In his introductory speech Dr. Ivo Josipović President of the Republic said that the 1990 Constitution expressed the wish of the majority of the Croatian citizens to have parliamentary democracy, market oriented economy and the rule of law introduced in Croatia, and that it had, as a legal act, made it possible for Croatian society and state to develop universally. Professor Jasna Omejec, President of the Croatian Constitutional Court spoke about the new transitional constitutions and the transformative role of constitutional courts of the states in transition and pointed out their interpretative duties and their special role in promoting general standards and guidelines for public bodies in these states. "It is my duty to say: the normative framework of the Constitutional Court needs to be changed in order to enable us to fully implement the European legal standards" and concluded her address with a wish for the legislator to pass a new Constitutional Act on the Constitutional Court which will make it possible for the Croatian constitutional judiciary to truly develop on the European grounds.

The Vice-president of the Croatian Parliament and one of the authors of the 1990 Constitution Mr. Vladimir Šeks, Professor Branko Smerdel and Professor Siniša Rodin from the Zagreb Law Faculty, Professor Arsen Bačić from the Split Law Faculty and Mr. Zoran Pičuljan, State Secretary in the Ministry of Justice also addressed the audience.