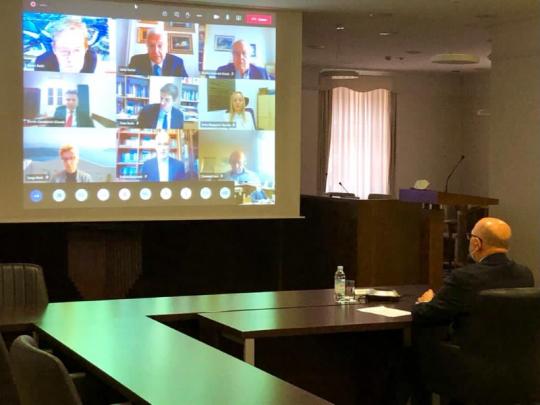 8 December 2020 - President of the Constitutional Court, Dr Miroslav Šeparović, gave an introductory lecture at a round table "Constitutional changes and political settlement - Croatia between the constitutional democracy and populism" of the State Administration, Judiciary and the Rule of Law Scientific Council of the Croatian Academy of Sciences and Arts. In his address he spoke about the Constitutional Court's role as a mediator of social phenomena given that it is more than often asked to arbitrate in complex and sensitive economic, social, legal and even political issues. He pointed out that this role can be successfully achieved only if the Court imposes itself, by the high quality of its decisions, as an authority in the society enjoying at least the majority of public trust. He concluded that the Court must find balance between judicial activism and self-restraint and optimise the relationship between the real life and the ideal. The only way to achieve this goal is by interpreting the Constitution in terms of the highest values of the constitutional order. Only in that manner will the Court realise its fundamental constitutional task of guaranteeing the respect for and implementation of the Constitution.