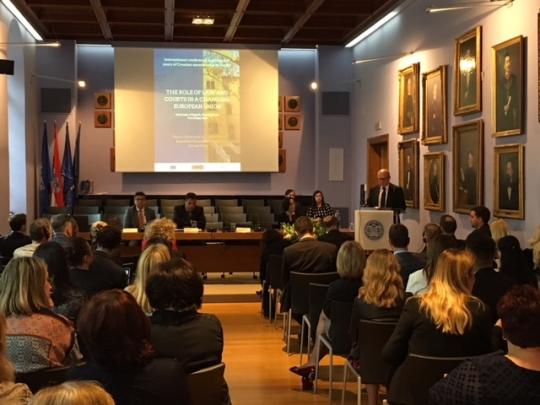 11 May 2018 - at an international conference "The Role of Law and Courts in a Changing European Union", whereby the Chair for EU Public Law of the Zagreb Law Faculty marked the five years of Croatian EU membership, President of the Constitutional Court of the Republic of Croatia, Dr Miroslav Šeparović, delivered a speech on relationship between the Croatian Constitutional Court and the EU Court of Justice. To this end he emphasised that the European values are also the values of the Croatian constitutional order and stressed our readiness and openness for a dialog aimed at achieving common goals - legal certainty and the rule of law in the heart of which lies protection of fundamental rights and freedoms. While speaking of the preliminary ruling mechanism, he mentioned that as a rather young EU member state, we have just begun to shape our practice and dialog with the Luxembourg Court, but in doing that, we start from the principle of mutual trust and cooperation and the jurisdiction of each of these two Courts.