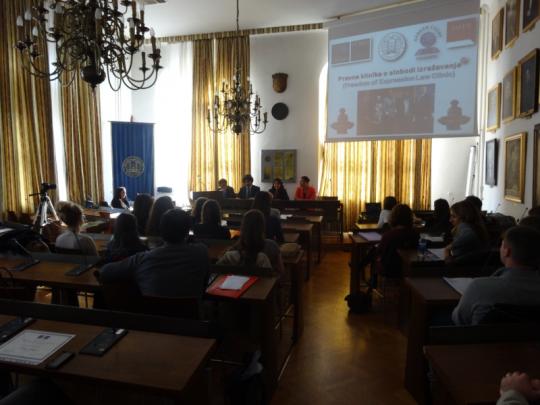 11 December 2014 - at the closing ceremony of the "Freedom of Expression Law Clinic" for academic year 2014/2015 held today at the Zagreb Law Faculty, Professor Jasna Omejec, President of the Croatian Constitutional Court, gave a speech entitled "Every day is Human Rights Day. On Human Rights we speak out!". In her lecture, dedicated also to the Human Rights Day (celebrated on 10 December) and to the signing of the UN Universal Declaration of Human Rights, she also referred to the European Convention for Human Rights given that through this instrument the content of the Universal Declaration has become formally legaly binding for all European citizens. In the end, she evoked the organic links between the Declaration, European Convention and the Croatian Constitution and called on the students to build their legal awareness in accordance with the highest legal standards set forth in these documents.

Freedom of Expression Law Clinic is a project initiated by the University of Oxford, Media Legal Defence Initiative (London) and Garden Court Chambers (London). As a form of practical training, it enabled students of the Zagreb Law Faculty to get to know different mechanisms for protection of the right to freedom of expression, in particular those of the United Nations, by analysing cases related to violations of the freedom of expression of journalists who petitioned to the UN bodies.