Marking the 60th anniversary of the Rome Treaties, Forum of magistrates 2017 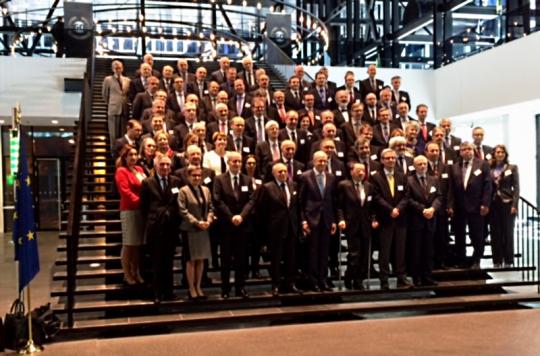 29 March 2017 -  As part of the celebrations of the 60th anniversary of the Rome Treaties, the Court of Justice of the European Union organised a Forum of the Judges, where the presidents of constitutional and supreme courts of the EU member states addressed several topics: "The network of EU justice: guarantee of a high-quality system of justice", "Forms of cooperation between the Court of Justice of the EU and national courts", and "A challenge raised by cooperation within a network: the protection of personal data". Invited by Mr. Koen Lenaerts, President of the CJEU, Dr Miroslav Šeparović, President of the Croatian Constitutional Court, participated in the work of the Forum of Judges, as well as attended the hearing in two cases related to the application for international protection lodged in one of the Member States by a third-country national or a stateless person (recast).
The Forum highlighted the importance of justice networks, which are vital for ensuring the quality of justice at EU level and which contribute to the creation of a truly common European legal space.  On this occasion the ECJ has adopted the following declaration:

‘The European Union is a union governed by the rule of law. Not only has it undergone significant enlargement since the signing of the Rome Treaties, but it has evolved materially since that time.
The 60th anniversary of the signing of the Treaties is an appropriate occasion to highlight the importance of the constantly unfolding dialogue between the Court of Justice and the national courts, a dialogue that pays due respect to their particular legal cultures and legal systems and the languages in which they operate.
In that spirit, the Court of Justice takes great pleasure in welcoming to Luxembourg the Presidents of the Constitutional and Supreme Courts of the Member States in order to strengthen the network of judicial cooperation, a clear sign of the emergence of a true European legal area.
The Court of Justice would like to draw attention to the essential role played by the network of EU justice, composed of the national courts and the Court of Justice, in developing and upholding the fundamental rights and the values of democracy and the rule of law on which the European Union is based.
The Court of Justice, in close cooperation with the national courts, will continue to fulfil the duty entrusted to it by the Treaties of ensuring respect for the law by all and for all, thereby safeguarding the values common to the citizens of the EU and the Member States.’