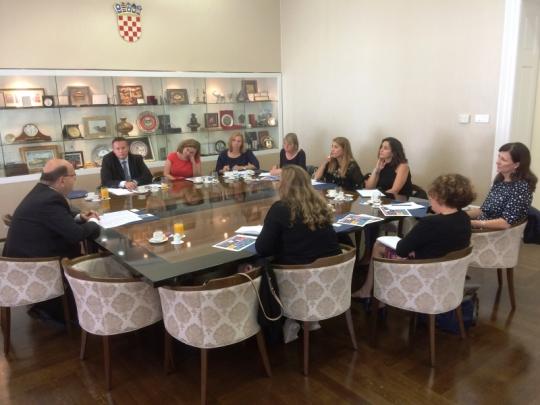 4 September 2018 - Judge Dr Mario Jelušić received several EU judicial officials whom the Croatian Judicial Academy hosted within the European Judicial Training Network (EJTN) Exchange Programme. The EJTN, which was created in 2000, aims at a fostering common legal and judicial European culture. The Exchange Programme was launched at the initiative of the European Parliament, and first implemented in 2005, with the financial support of the European Union. Judge Jelušić introduced the colleagues to the functioning and organisation of the Croatian Constitutional Court, specially emphasising that the Court is not part of the judiciary. The judicial officials were particularly interested to hear about the process of election of constitutional judges, given that in Croatia the procedure starts with a public tender. Furthermore, they discussed about our jurisdiction related to programs and activities of political parties and the impeachment of the President of the Republic.