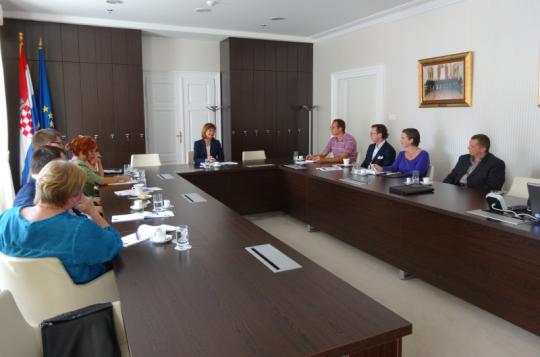 26 September 2013 - Judge Snježana Bagić, Deputy President of the Court, received today several EU judicial officials whom the Croatian Judicial Academy hosted within the Exchange Program of Judicial Authorities. The Exchange Program, which was initiated by the European Parliament in 2003, aims at developing the mutual trust between judicial authorities of the EU members by allowing them to get to know each other better and by giving them the opportunity to work together. Judge Bagić introduced the colleagues to the functioning and organisation of the Croatian Constitutional Court specially emphasising that the Court is not part of the judiciary. The judicial officials were particularly interested to hear about the process of election of constitutional judges, given that in Croatia the procedure for electing a judge commences with a public invitation.