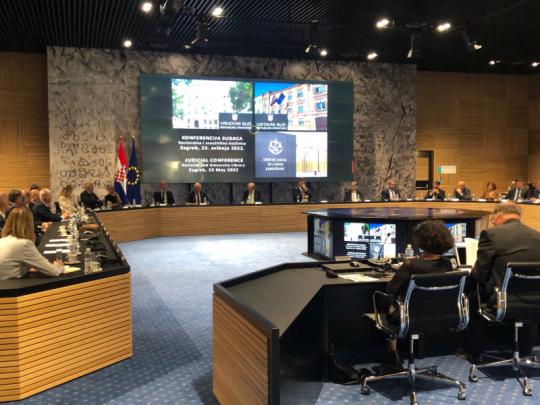 24 May 2022 - Organised by the Croatian Supreme Court and Croatian Constitutional Court, a judicial conference about the role of highest courts in ensuring uniformity of law was held today in the National and University Library in Zagreb. In addition to the main topic, gathered judges of the Supreme Court, Constitutional Court, and Croatian regular courts, deliberated with the judges and advocates general of the Court of Justice of the EU (CJEU) also on unfair terms in consumer contracts and European arrest warrant. In his introductory speech on the judicial cooperation and preliminary reference procedure President of the CJEU K. Lenaerts pointed out that Member State courts are not only courts of national law but also courts of EU law, and thus the dialogue that takes place between the national courts and the CJEU is an essential tool for ensuring the full and uniform application of EU law. President Šeparović also pointed out in his address that the Constitutional Court regularly follows the CJEU jurisprudence and uses it in forming its own views, but for now holds that submitting the preliminary questions is primarily the task of the regular courts, the Supreme Court included, and that the Constitutional Court will put it forward when it finds that there are problems or conflicts in the interpretation of constitutional law and EU law. He concluded that with no cooperation and dialog between the national courts and European courts there is no efficient and successful protection of fundamental rights and interests of citizens because, as he put it, the Croatian courts are European courts, and European courts are also the Croatian courts.

In the opening part of the Conference the audience was also addressed by Andrej Plenković, President of the Croatian Government, who encouraged the work of the CJEU and national courts in the application of the EU acquis aimed at safeguarding the common values and the rule of law through the dialog and mutual respect.