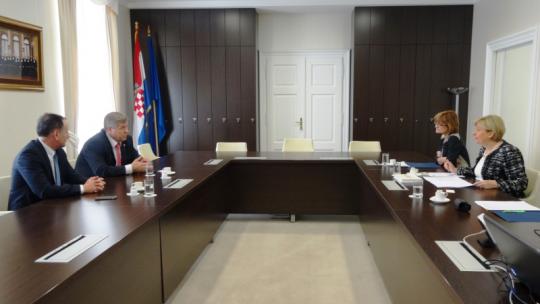 20 May 2016 - President, Professor Dr Jasna Omejec and Deputy President, Dr Snježana Bagić, received today Dr István Stumpf, Judge of the Constitutional Court of Hungary, accompanied by H. E. József Magyar, Hungarian Ambassador to Croatia. In a very cordial conversation they exchanged views on, among other things, the procedure for election of constitutional court judges given that the Hungarian Court for some time now lacks not only four judges but also the president, who are all elected by the Hungarian Parliament. Dr Stumpf emphasised that, luckily, the Court can operate normally even in the incomplete composition since they are not, unlike the Croatian Court, overburdened with the high yearly inflow of cases and as they sit in eleven, instead of fifteen judges they have a quorum for passing judgments. Deputy President Bagić spoke about the internal organisation of our Court, which is more sophisticated than the Hungarian and dictated by the extremely high number of incoming cases. Both sides emphasised a very good cooperation between the two Courts established back in 1993.