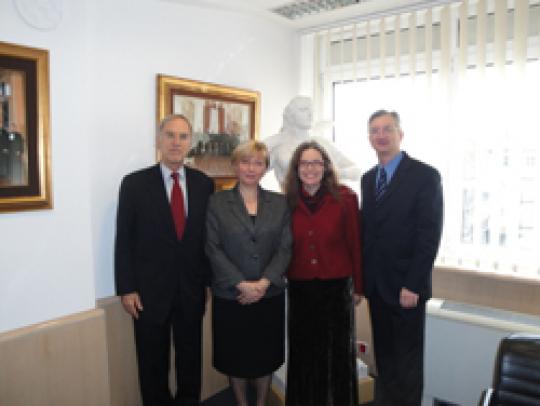 30 December 2009 - H.E. Daan Everts, Head of the OSCE Limited Election Observation Mission and Mr. Caren Gaynor, legal analyst visited today the Constitutional Court where they were received by Professor Jasna Omejec, President and Mr. Teodor Antić, Secretary General of the Court. They discussed the jurisdiction of the Croatian Constitutional Court related to the control of constitutionality and legality of the elections and the electoral disputes as well as the electoral legislation. Ambassador Everts stated that the 2009 presidential elections complied with the OSCE commitments and other international standards for democratic standards overall. Both sides agreed that the electoral legislation should be revised, in particular the 1991 Election of the President of the Republic Act, which is largely outdated and lacks consistency. The OSCE Limited Election Observation Mission will remain in the country to assess the second round of the election, scheduled for 10 January, after which they will issue a comprehensive final report including recommendations for potential improvements.