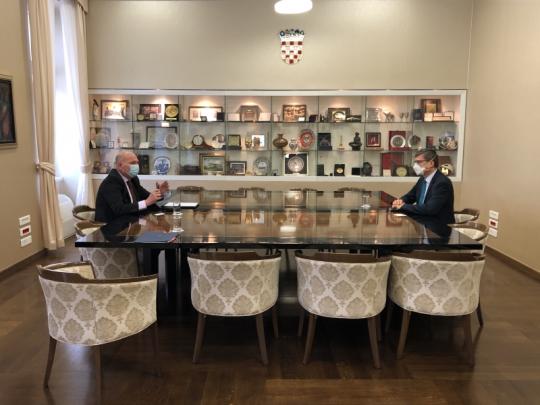 13 January 2021 - H. E. Markus Wuketich, Ambassador of the Republic of Austria to the Republic of Croatia, paid a curtesy call to Dr Miroslav Šeparović, President of the Constitutional Court of Croatia. President Šeparović informed the Ambassador about the organization and jurisdiction of the Croatian Constitutional Court and pointed out the differences and similarities between the constitutional and legal frameworks of the two countries. Mr. Wuketich, a lawyer himself, was particularly interested in the workings of our Court and the decision process, and the talks were also held about the jurisdiction of both Courts regarding the COVID-19 pandemic.
Both sides agreed that the two countries share plenty in common and emphasised a good multi-level cooperation, especially between the two Constitutional Courts which in 2017 re-established their bilateral relations.