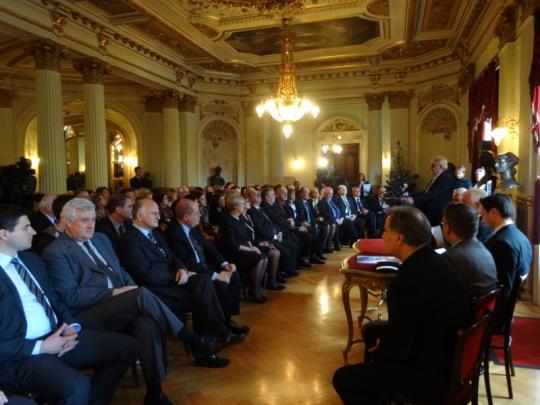 10 December 2013 - this year, the Croatian Helsinki Committee for Human Rights has decided to bestow the Miko Tripalo Award for contributions to the protection of human rights in Croatia during this year that exceed professional obligations and the usual standards to the Constitutional Court of the Republic of Croatia and to each of its judges. In her greeting speech President Omejec thanked the Committee for bestowing this prestigious reward to the Court and judges on the occasion of the 2013 Human Rights Day and said: "By this reward, Miko Tripalo's work as a skeleton "of Coratia's righteous heritage" has symbolically become also a guideline for the future development of the Croatian constitutional justice. I deeply believe that the Constitutional Court will not let this heritage down." She also pointed out that Croatia strongly needs the dialog, but above all it needs the constitutionalizm which is nothing more than "submission of the public power to the discipline of legal norms."