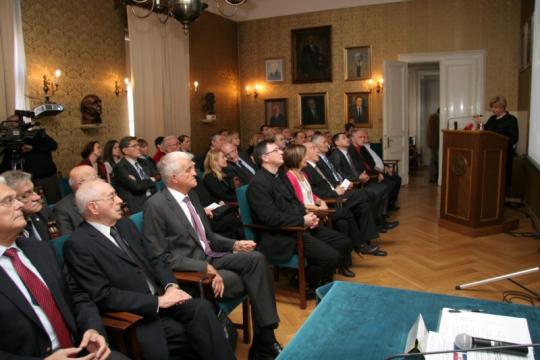 10 December 2013 - At a solemn session of the Scientific Council for Peace and Human Rights of the Croatian Academy of Sciences and Arts marking the International Human Rights Day, President Omejec held a lecture entitled "Human Rights Day - a Symbol of Faith and Hope in the Society of Just and Equal" in which she spoke about importance of the Universal Declaration of Human Rights adopted in the United Nations on 10 December 1948.

"The drafters of the Declaration learned the most important thing, which the Croatian society so enormously lacks - they learned to lead a dialogue, they learned how to efficiently work together despite huge political differences, cultural barriers and personal rivalries" said the President. She pointed out that the Declaration is the most translated document in human history, which is on the one hand prised and cherished and on the other hand so poorly understood and read. "It seems sometimes that our Constitution, the most significant human rights document in the legal and political history of the Croatian nation, shares the same destiny. I worry because the Constitution is taken instrumentally in the practice, and used as a mere instrument for achieving partial political interests", she added and warned that our society fails to understand the role of a Constitutional Court which in transitional countries serves as a silent constitutional-maker with the task to compensate for the weaknesses of the insufficient political culture. "The Croatian Constitution tells one of the most beautiful stories of modern civilisation, story of freedom and responsibility of an individual and his/her human dignity and of permanent values which should make an inseparable part of each individual in our society. The childhood and young years of our country are behind us. Croatia has gradually been maturing, it became the EU member and it is on the path to secure the requirements for the development of democratic society grounded on the rule of law and true respect for human rights" concluded President Omejec.