Working meeting with the judges of the Constitutional Court of Italy

Working meeting with the Judges of the Constitutional Court of Slovenia

Working meeting with the judges of the Constitutional Court of Kosovo

Visit of the High-Ranking Delegation of the Kingdom of Thailand 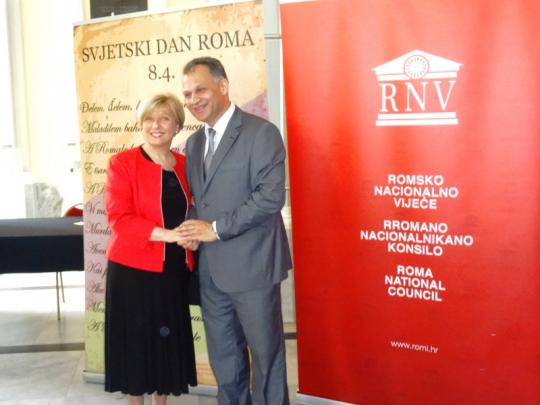 8 April 2014 - Professor Dr Jasna Omejec, President of the Court, participated in celebrations marking the International Roma Day, held on 8 April every year since 1971, when the first-ever international Roma congress was held in London. The Congress accepted the name "Roma", together with the official language (romani chib), flag and anthem (Gyelem, gyelem).

In his congratulatory message, the President of the Roma National Council and a member of the Croatian Parliament, Mr Veljko Kajtazi observed that the position of Roma has been improved, but they still face problems in education, low living and health standard. Minister of Foreign Affairs Vesna Pusić, who was awarded the 2014 Roma National Council's award for the contribution to improvement to the Roma position and development of human rights in general, observed that the Roma people, as the most sensible and most excluded community, are a test for the society in general and she praised not only the Roma National Council's work but also all young Roma people who started to develop the sense of pride for belonging to their community and encourage the broader community to use their potential.