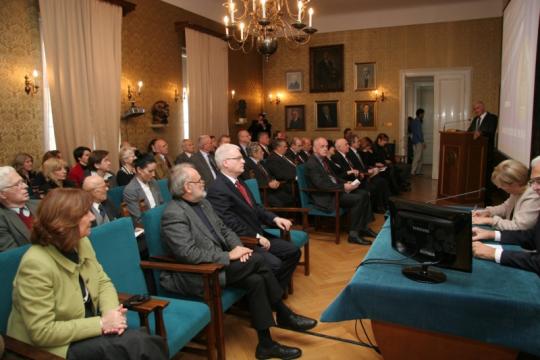 26 November 2013 - Professor Jasna Omejec addressed the audience, together with the President of the Croatian Academy Zvonko Kusić and Deputy President Jakša Barbić, F.C.A., at the promotion of the first twenty books of edition Modernizacija prava (Modernisation of Law) of the State Administration, Judiciary and the Rule of Law Scientific Council of the Croatian Academy of Sciences and Arts. In this Project, launched on 12 December 2005, when the first round table was held on the judicial system reform, twenty books have so far been published tackling the most important questions of the Croatian legal order.

In her speech President Omejec noted that the focus of the edition gradually shifted from the specific legal areas pertaining to different legal branches to the matters related to the functioning of the state and the problems of public, i.e. constitutional law. This switch towards the issues of constitutional democracy and its values has clearly showed that the Academy timely recognised indicators of rather unsuitable path the Croatian society has recently taken and of very disturbing social phenomena that we have been witnessing today. At the end she proposed that the completion of this cycle be symbolically marked by a special, well equipped edition embracing the most successful works published so far in the series.