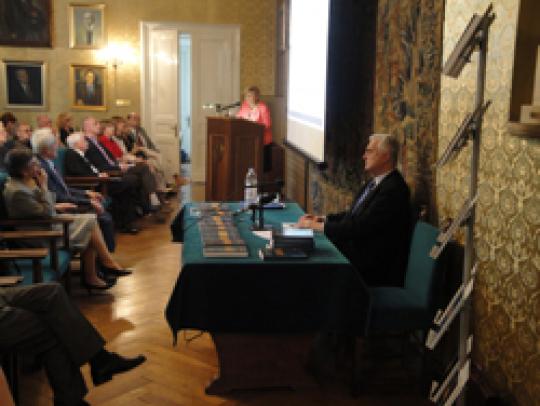 9 June 2009 - Professor Jasna Omejec addressed the audience, together with Academics Jakša Barbić and Vladimir Ibler, at the promotion of the first ten books of the edition Modernizacija prava (Modernisation of Law) of the State Administration, Judiciary and the Rule of Law Scientific Council of the Croatian Academy of Sciences and Arts. In this Project, started on 12 December 2005, when the first round table was held on the judicial system reform, ten books have been published with the aim of conducting an integral deliberation on the harmonisation of the Croatian legal system with the acquis communitaire of the European Union. The last in the row, released in April this year, tackled the Croatian constitutional judiciary. President Omejec emphasised the importance of the Academy's Project within which not only numerous proposals regarding the reform of different legal spheres have been put forward but also particular legal solutions, substantiated by the scientific and expert reasoning for their acceptance, have been formulated as well. Furthermore, President Omejec also highlighted the need for the continuation of this Project and proposed that, on the occasion of the Republic of Croatia's 20th anniversary, a separate edition entitled "Our State" be published containing the best covered themes of the former editions.